Alive, with No Pictures to Prove It 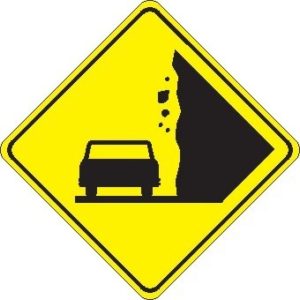 I suck at taking potentially epic video and photographs.

I need a jack in the back of my brain where I can plug in and just beam my Photoshopped memories out into the world. Except I’d end up trying to price memory plugs from all available providers and protection plans and surgery fees until I said SCREW IT I’m just using my Verizon Wireless phone, which I would continue to fail at.

Take last weekend. I headed out to Crescent City on the northern California coast to observe the supposed MONSTER STORM which turned out to be pretty much like any other winter storm on the coast. Wind lashing the windshield, pooling water, forest misting like it’s on fire and — oh, landslides, mudslides! Fun!

I’d often noticed the giant, thatched-steel blankets draped over California hills and mountainsides and ominous rockslide signs showing a Buick-like car about to get bitched by a boulder. Never seen one up close and personal.

By way of context: Without kids and wife in tow, I like to hug the hills and curves like a shitty racecar (PALINDROME!) driver and go to fast in a windows-down, music-blaring fugue, sometimes making a nnnrrrrrrrrrrr sound as I do it. So I’m nnnrrrring around a bend to a sudden flare of brakes from the truck in front of me and – egad!

Rocks. Falling from above. Big, lazy arcs. Basketball sized. Baseballs sized. Then pebbles. Tree pieces. Chunks, calving off the side of the hill right in front of me. Smashing the guardrail. KABOOM. I stopped. Holy shit. I looked up at a suddenly suspicious section of clinging mud and rock above me.

To my left, a flash of moving bodies. Two guys clad in what looked like emergency gear hauling ass to the site of the slide. Emergency, right? I jumped out to help. The guy in the white truck also got out. He had a foot-long beard, a gray hoodie, and shovels. We’re near the Lost Coast. Of course this man had shovels.

SO THERE I WAS. Grabbing chunks of rock, logs, hauling them over the guardrail with a heave-ho clatter. Laughing, bantering, having a grand ol’ time until someone yelled:

Fear. Leg-shaking heart-jolting fear that sent me scrambling to the other side of the landslide. We stood. We watched as two football-sized rocks smashed onto concrete. A skitter of pebbles, like crabs with stony feet. Tickticktickticktick.

And we inched in. We picked up more. Shovel, scraping concrete. Less laughter. And then:

The guy with the shovel, sluggish. I’m halfway to Idaho and this crazy motherfucker is just standing there. Big rock whhhzzzz right by his head.

Then I looked around at the other rock-pickers. These guys weren’t emergency workers. Those were wet suits. These idiots were KAYAKERS. Kayakers who, by the way, came out on the stormiest weekend in recorded history to kayak in the ocean. And Shovel Man.

A word of advice: If you ever find yourself surrounded by storm-chasing sea kayakers and Shovel Man, you are probably going to die soon.

I waited for more skittering rocks to stop. Then sprinted across the mud and talus to the ol’ Buick.

“Got decent tires,” one of the kayakers said. He winked. “I think you could make it across.”

But I could either take their advice, or hang out and get pancaked by a boulder. So I jumped in and nnnnrrrrrrrrr! away I went. Epic.

As per usual, I’ve got no pictures to prove this. It would’ve either been a killer selfie or one hell of a Darwin Award. Maybe next time. Maybe not.