Friday Night Lights and the Worst City in the World 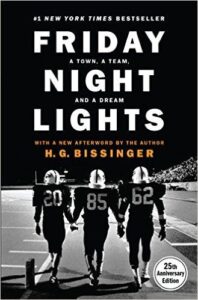 If you grew up in a small town, or ever wondered why people care so much about football, or just want to read some of the best journalistic writing on the planet, I recommend Friday Night Lights by H.G. Bissinger. It’s better than watching high school football. It’s better than the TV show by the same name, or watching James VanDerBeek say “I DON’T WANT. YOUR LIFE!”

It’s race, politics, corruption, seedy Texas, slick Texas, the origins of George Bush, and all sorts of other goodies. Read about what author Larry McMurtry described as the “Worst City in the World” and why football became their religion.

Reading this as part of the ongoing research for an upcoming book (working title Stillwell), which is mostly researching the culture of the town I grew up in. It’s been fascinating.  The route I traveled to this book is equally interesting. Recently went to go see Hanif Abdurraqib speak with Kaveh Akbar and Leslie Jamison at a killer panel by Literary Arts and went poring over his bibliography afterward. Turns out he wrote the forward to a book called Friday Night Lives which is a retrospective photo-driven project which intercuts photos of the players from Bissinger’s book with where they are decades later. I was curious why a poet/genius like Hanif Abdurraquib would be passionate enough about these books to write the forward – now I get it.

It’s high school football as a fascinating keyhole through which to peek in on humanity and small town America – and it hit plenty close to home.