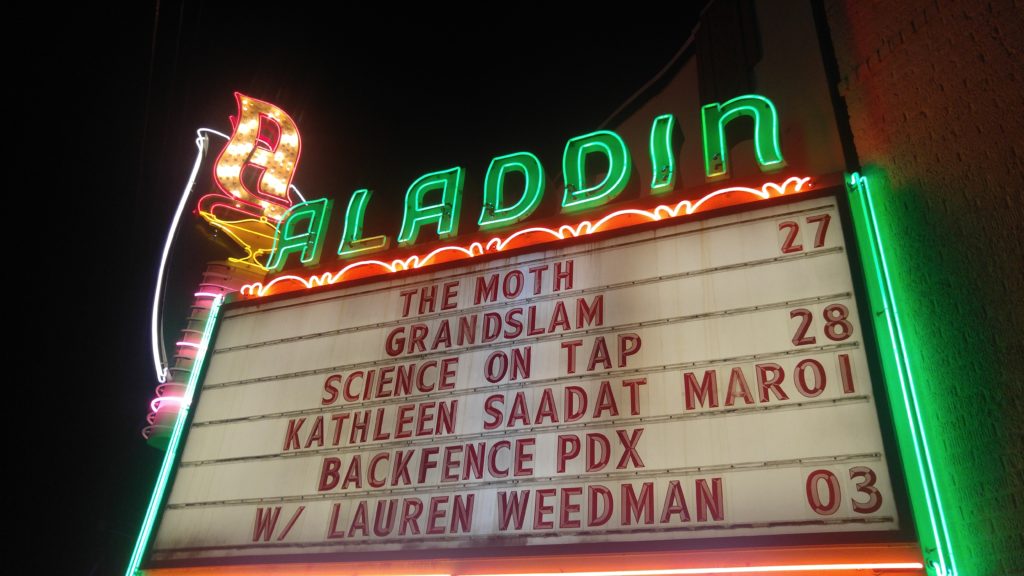 I discovered The Moth Radio Hour on a long and lonely drive through the Utah desert about five years ago. It was the only thing that kept me awake and alive. Since then, I’ve dreamed of telling a story on The Moth. SO — a few months ago, some friends from No Shame Eugene and I trucked up to Portland for a StorySLAM at Holocene. There was a line. Big crowd. All four of us put our names in the fishbowl and during the first half of the set (5 stories) no one was picked. In the second set, two of my friends got drawn and it was down to the last story of the night. I’d just ordered a nice tall whisky when I heard “J.C. Geiger, please take the stage!” I went into a fugue state, got up, and miraculously won the slam with a story about how I learned to make a strange snapping sound with my finger. More here.

Winning a StorySLAM qualifies you for the GrandSLAM, and so, at the end of February, I was headed to the Aladdin Theatre in Portland to spin a story for a larger crowd than I have EVER told a story for. Sold out. Somewhere between six and seven hundred people.  I was excited, and a little sick. Luckily, The Moth sets you up with an Official Story Coach if you make it to the GrandSLAM. How cool is that? A story coach! In NEW YORK. Living in Eugene, it’s still a very big deal for me when I’m on a call with someone in NEW YORK CITY. I dress up. I call it “New York City” even though everyone in New York just calls it New York and I also call the time zone EST when they call it ET because I want to milk every delicious, New Yorky letter of it.

My story coach was Larry and he was incredible. Attentive, genuinely curious, authentic and refreshingly no-bullshit. Over Skype, he let me spin a nasty, unwieldy 24 minute tale to help me mine the gold from it. He told me to call him back once I’d made some cuts. The next time, the story was 12 minutes long. He told me I could do it. I believed him. Larry the Story Coach is very convincing.

My story was about how I did not vote in the 2000 election (ugh), and how the guilt of my abstention drove me to uproot my life in 2004 and volunteer for a miserable voter registration campaign in Jacksonville, Florida.

I had a week to get it right.

The day of the event, I rode up from Eugene to Portland in a bus. I brought along a cool little timer I usually use for making croutons. So they don’t burn. I am fucking awful about burning croutons. 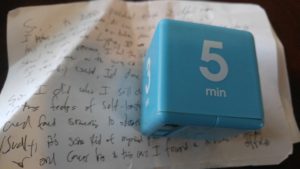 I talk to myself in public.

That day, I used it to time my story on the bus. I told it out aloud another few dozen times, then five more times at the Amtrak Union Station, then went to the event.

You don’t know the storytelling order until you get there, standing on stage during sound check with the other storytellers. They all looked varying degrees of friendly and nervous. We pulled our numbers from a plastic orange Halloween pumpkin. I picked number 9.  I went outside, walked in the rain, and told myself the story one more time. I got a phone call from a congressional representative who wanted to know if I could count on her vote and asked her to please call back. I did take that as a good sign, given my story’s topic.

I got some espresso. I got beer. Sips, sips.

The sign on the ticket desk now said SOLD OUT. I went inside and it felt like go time. Lights dimmed. Crowd quieted. Soothing, beautiful music by Megan Diana.

The music and darkness worked a minor miracle. I relaxed — ready to enjoy the stories of my fellow Moth(ers). And they were GREAT. Stories of a campout gone wrong. Becoming a Viking for an afternoon. Seeing the humanity of others at the Values Voter Summit. Intermission brought my nerves back. Stories six, seven, eight went whipping past and my stream of consciousness turned to a long, crackling hiss — my heart pounding, hammering, doing every bad metaphor and wondering, almost aloud: Should I just shut down now? Just do a full cardiac arrest? One of the storytellers is an EMT. He’ll help you.

When they called my name, I didn’t know if I’d walk up to the microphone and unleash this story or stand in the spotlight dumbstruck and gobbing like a fish.

But it was magic.

Spotlight magic and the warmth of an attentive audience and HOURS AND HOURS AND HOURS of preparation paying off. And hot damn — I love every minute of telling that story. Attention is one of the greatest gifts a person can give. To have the attention of a full house at The Aladdin for a story I’d lived through and replayed, curated and prepared turned the stage into a runway, I was airborne.

Then I won the Moth GrandSLAM.

Unexpected, shocking. Admittedly, luck involved — the order of the speakers, mood of the judges, the broader context of the story.

But here’s what matters about the win: It’s incredibly validating for the artistic process. I’ve never worked harder on a story, and it paid off. It was strange for my office walls and maybe the people on the plane and bus while I mouthed words and played with a crouton timer in my lap. Right?  But the work of an artist is often this way. The being alone, the public wrestling with process, the attention to almost imperceptible detail. Everything so strange-seeming and eccentric until the moment of delivery, when it works.

I called Larry the Story Coach one last time. Smiled and jumped up and down on Skype so he could witness the pure, unmitigated excitement. I’m so appreciative of The Moth providing a venue for people’s stories. I’m grateful to be part of something I’ve loved for so long.

On the drive back to Eugene, I imagined another traveler late at night, searching for a signal. This traveler suddenly wakes up. Sits up straight. Something new on the radio: A story about a guy who failed to vote, who drove down to Jacksonville, who did his best to make a difference. 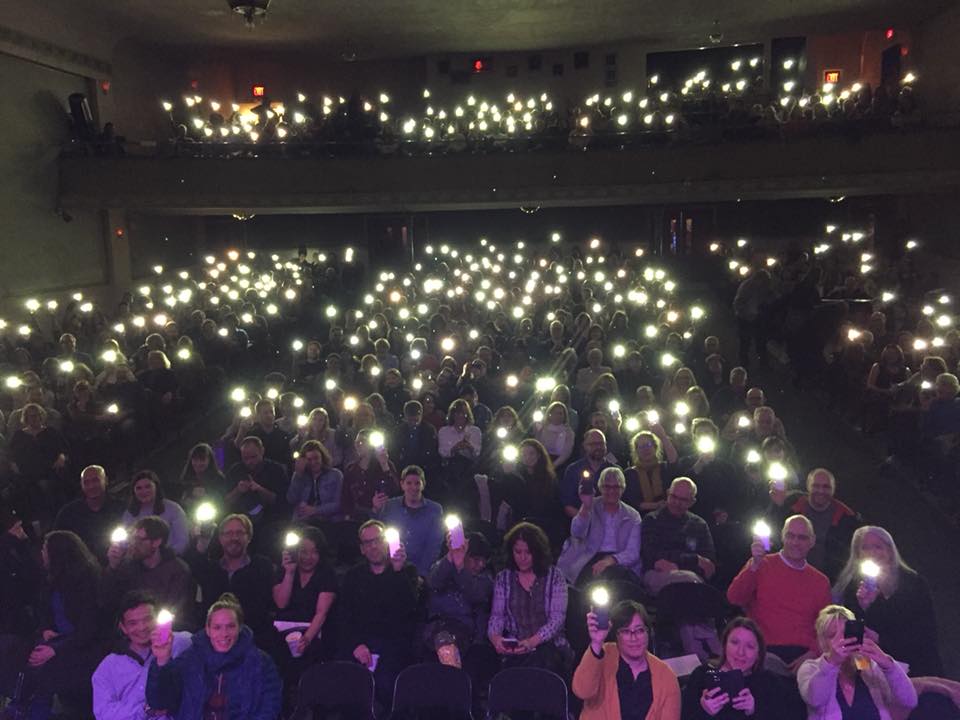 View from the stage. Photo courtesy of Dave Williams.