A bit of background on this insanity:

To promote WILDMAN’s release, I attempted to drive from Eugene, Oregon to New York City in a ‘93 Buick Century – the same car that broke down, stranded me in rural Washington, and inspired me to write the book in the first place. I drove 5 miles for every copy of Wildman sold, and 1 mile for every $5 donation to the American Library Association.

The entire 10-day, 4300-mile journey was live-streamed using two phones and a Chromebook.

All day. All night.

It’s amazing the trip worked at all. But here’s what surprised me even more:

Sometimes you get lucky and one of your musical idols (David Wimbish of the Collection) happens to be in a town you’re passing through. You somehow convince him to climb into your ’93 Buick. With his guitar. And that’s when the magic happens.

2) Traveling with a mannequin is a good conversation starter. And probable cause for a police stop.

As a joke, my friends from Eugene put a mannequin in the Buick to keep me company. Viewers quickly dubbed her “Silent Barb,” and she became considerably more popular than me. After I noticed the second police car tailing me in Texas, I took off her wig and shoved Silent Barb farther down in the back seat. Which was somehow even creepier. In this clip, the mannequin has locked me out of the car after keeping watch on the Buick in Boise all night.

3) There’s a whole lot of nothing out there. 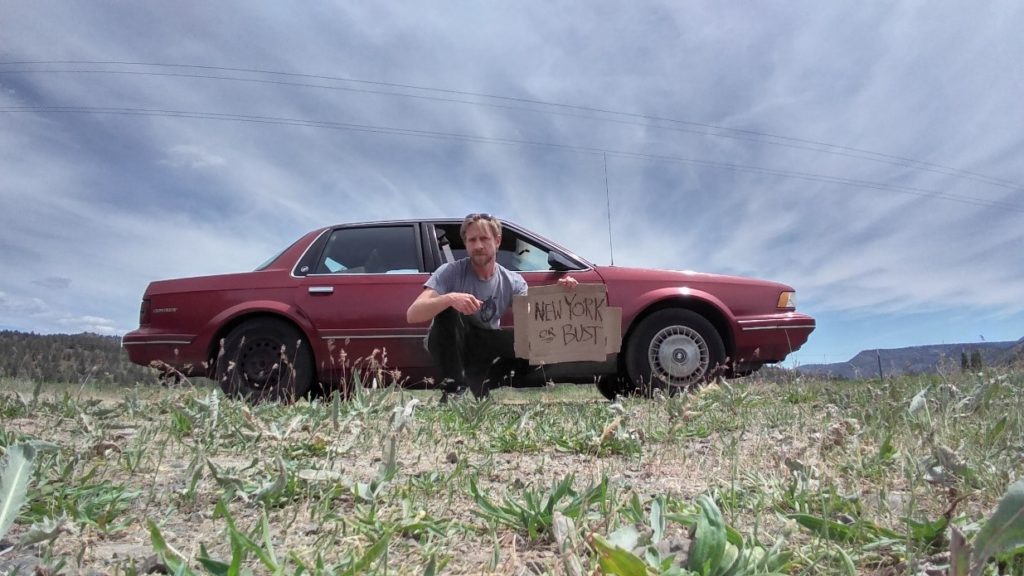 Eastern Oregon, West Texas, and a big chunk of New Mexico offered up little more than tumbleweed, armadillos, road kill, and abandoned vehicles.  A good incentive that it was important to JUST. KEEP. DRIVING.

4) During a live stream, an empty seat is more compelling than me.

After a few days live-streaming on the road, I noticed a pattern. If I put my camera on the empty seat of my Buick, I’d attract YouTube viewers. The longer I recorded the seat, the more people showed up. As soon as I climbed in the frame, I’d lose up to 50% of my audience. A user later explained: “The empty seat just gave us this great sense of anticipation.” I understand there is a movie deal in the works for “Empty Seat.” I have yet to be contacted.

5) Friends and family will ambush you with kindness and light sabers.

I expected people to like my Facebook posts. Maybe retweet some pictures. I did not expect friends to arrange places for me to stay, make me a road trip mixtape on Spotify, keep me awake on midnight drives through West Texas, print flyers for their schools and neighborhoods, and – at one point – ambush me in North Carolina with light sabers, costumes, and beer. The Wildman Road Trip reminded me I know some AMAZING people. There was a lot of love out there, folks. A lot of love.

6)  I would be convinced to appear on a children’s show.

It turns out Danny Joe’s Treehouse is filmed in Baltimore, MD. And Danny Joe, himself, invited me to be a guest on his show. He planned to broadcast to his loyal audience of children and families with some puppeteering and a classic road trip song. Until he got a surprise of his own.

7) The finish line will be mind-blowing.

I wasn’t 100% sure what the team at Disney thought of this trip — or if they expected me to make it. So when they greeted me with a checkered flag, road snacks, and a trophy, I thought maybe I’d died somewhere on the New Jersey Turnpike and ended up in Debut Author Heaven. This video, like all of them, was recorded and broadcast live.

A final surprise? The trip itself netted around $4,000 dollars for libraries from over 100 new donors. And support continued to pour in after the journey ended. To date, around 400 book lovers have contributed to the Wildman Road Trip!

The ’93 Buick is currently parked in a secluded garage in the Midwest, resting up for its return trip in July. It’s 2,000 long miles back to Eugene, Oregon — and I can’t wait to see what happens next.