The Conquering of Chambers Hill 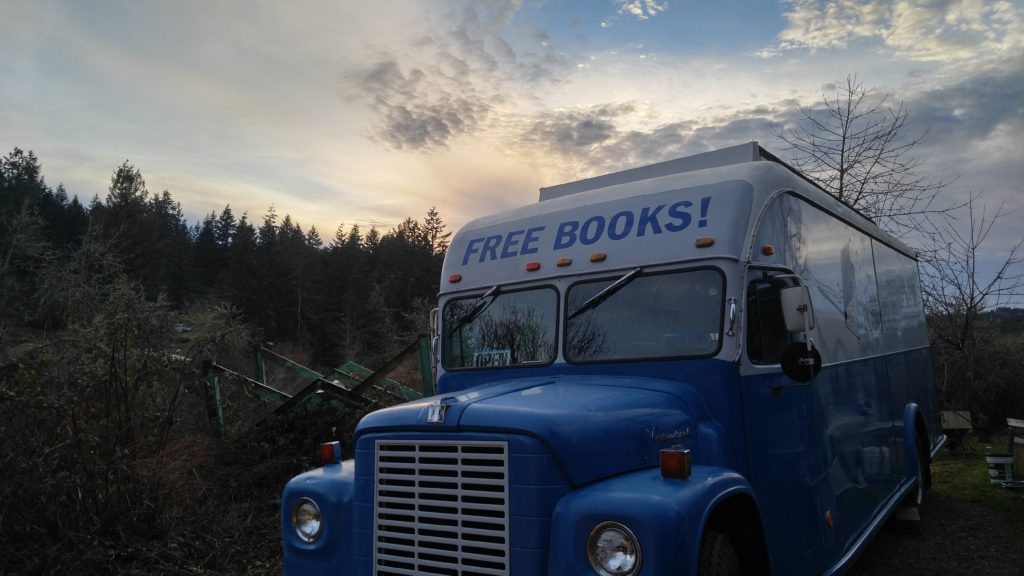 My mission is to climb the hill, but the Bookmobile dies half a block from the home of the original owner. To be fair: I killed it. I’m tilted backward on a slope, foot on the brake. I’ve been told this is the worst possible situation when driving a stick. I can only assume this is true, since I don’t really know how to drive stick.

I remove my foot from the brake and the vehicle lurches backward – 15,000 pounds of books and steel. I’m back on the brake. Leg shaking. I’m trying to avoid destroying this legendary vehicle. I’m also remembering what my letter says, waiting for me at home. I contemplate the term “learning curve.”

I turn the key, rev the engine, and slide backward. I stomp the gas, release the clutch, and the engine dies. Rolling back, faster — I’m back on the brake. Literally, standing on the brake.

One hand on the wheel, I slip my phone out of my pocket and call the original owner.

“I know. I can still see you from my house.”

In the side mirror, Ezra waves. He walks uphill. He’s breathing hard, looking up at me.

“Use the emergency brake,” he says.

“I’m trying,” I say. The handle jiggles in its housing.

“Passenger seat.” He leaves out where you belong, but I still hear it. Ezra lifts himself into the doorway and puts his foot beside mine. We’re splitting the small brake pedal between us. “One. Two. Go!”

I leap out of the driver’s seat and crash into the passenger seat. Ezra takes my place and grabs the wheel. We breathe for a moment. He turns the key, guns the engine and the Bookmobile lurches to life. He makes it work, engine roaring up to the stop sign where the vehicle idles like:

See? Not that hard, kid.

“I suppose I should give you a driving lesson,” Ezra says.

So we tool around the neighborhoods together. I get the hang of things – my turning radius training and stick-shift practice have paid off a little. The only truly embarrassing spectacle happens in front of my entire neighborhood, when everyone I know with kids has come out to see the Bookmobile. They don’t leave and go inside like they should. They stand on the sidewalk, waiting to see me off.

“There Jeff goes! Wave everyone!”

Finally, we make the corner and turn out of view. Now it’s time for Ezra to go home. There are two ways – one way is up a nice, back and forth switchback on the elegantly-named Story Road. The other is called Chambers Hill. As in torture Chambers. Or the Chamber pot you may need when you’re about to piss yourself trying to drive stick shift up this false-summited, sadistically-graded motherplucker of a hill.

“You want to go up Chambers,” Ezra says, staring at me.

“Figure it out!” he shouts back.

Another stop sign. We’re titled back. All that steel and paper. You come to realize books are made of wood, and you’re driving a glorified logging truck with a tricky braking system.

In with the clutch and I hammer the accelerator. Revving, roaring, and I’ve finally learned something. The Bookmobile climbs and glides and the power is there and Ezra is nodding. We’re going up and up an finally the hill smooths out.

We stop and my leg is jittering, hopping up and down by itself.

“Had to do Chambers Hill, didn’t you?” He shakes his head.

I backed in the Bookmobile without damaging people or property, then rode the ’93 Buick back down the hill and opened my letter.

And this adventure is just beginning.